Villagers in northern Vietnam use bamboo to walk on water

Bamboo sections strung together make for a precarious crossing of a deep river in Lang Son Province.

Residents of Xuan Lung Village in the northern highlands province of Lang Son cross the Ky Cung River on a bamboo bridge every day. This perilious crossing is the only way that the 320 residents of Xuan Lung can connect with the outside world. Before this “bridge” was built, people used rafts to get to the other side.

The “bridge” here is 17 bamboo rafts put together. Each family in the village had to contribute a bamboo pole and money to complete the bridge. They got cable wire from throwaways of a mobile phone company to tie the rafts together. Such a bridge can only last about six months.

“Previously, to build houses, people had to wait until the dry season to carry bricks and sand across the river, or if there was a pregnant woman, we had to put her on a hammock and carry her on a raft to cross the river,” said Van Thuong, head of Xuan Lung Village.

The safety of the village people depends on rusty iron wires and pipes used to tie the bamboo rafts and two sides of the bridge.

“I go on this bridge at least twice a day, sometimes four times. I have fallen into the river many times and almost drowned. The life jacket is my best friend when crossing the river. The water is terrifying and I don’t know how to swim,” said Vy Thi Ket, a primary school student. 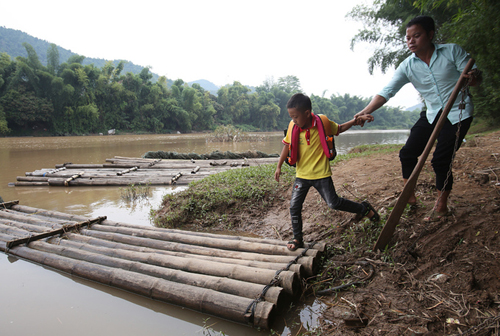 Van Thuong takes his son to school. Thuong said 67 families live in the village now. The distance to the other side of the river is 140 meters, and water is six to 20 meters deep. 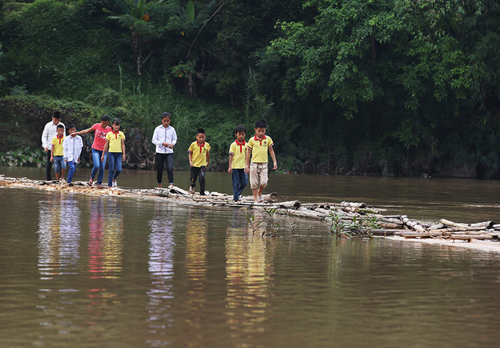 Children cross the river on the raft bridge to get to school. There used to be a school in Xuan Lung but it closed due to a lack of students. So children from the village use this bridge to get to another district.

But the bridge won’t work during the rainy season. Parents then take their kids to school on rafts. Each family has two rafts (worth $30 each), one for the kids and one for the adults.

An anxious student crosses the river. Official statistics show seven cases of drowning and six instances of people being saved just in time over the past 10 years on this river. People falling off this bridge is a common, daily occurrence.

The narrow bridge makes it difficult for two people going in opposite directions, and they have to engage in a delicate balancing act. “The bridge becomes overloaded during weddings and funerals and it takes hours to cross the river,” said Khiem, a villager.

Xuan Lung village lies in a valley that is mostly isolated from other areas. Most of its population are of the Nung ethnic minority.