“Don’t think about making art, just get it done. Let everyone else decide if it’s good or bad, whether they love it or hate it. While they are deciding, make even more art.”

Every time I took inventory of my life it was always missing art. Yet I wasn’t taking action to change that. I just kept wishing — wishing I was good at drawing and wishing I had more art in my life. In conversation with my wise older brother I told him my desire to become more skilled at drawing. With one simple question he helped me recognize that I was all talk and no action. “What can you do to improve your skills?” he asked.

I was doing exactly nothing. Not only was all the wishing growing tiresome, it was also getting me nowhere. It was time to do something about it.

So I made a promise to myself that I would draw every day for one year. The rules were simple: Every day I had to spend at least 10 minutes drawing and have a finished product. For accountability (and fun) I started an Instagram account to track the project. I named the account Pippi Duchamp — the moniker being a combination of the names of two of my heroes: Pippi Longstocking and Marcel Duchamp. They would be my inspiration — two bold characters who pushed boundaries.

I started immediately. I found a photo reference I liked, set a timer for 10 minutes and did a quick sketch that I was rather pleased with:

One good sketch did not lead to another, however. Which brings me to my first lesson.

Lesson One: It doesn’t matter if it is ‘good’ or ‘bad’

The drawings I was most proud of sometimes received the least ‘likes’ from my Instagram audience. Like this one:

I loved this drawing. My audience didn’t.

I was so happy with the result and excited to share it. I was looking forward to the dopamine rush I would get when I checked my phone in the morning to see all the new likes and followers and the gushing compliments in the comments. Instead: crickets. I was one of the few who liked it.

The inverse also happened. One night I did a drawing I thought was awful. I was embarrassed to post it but too tired to do a new one. Exhaustion won and I posted it, telling myself that I never promised I would do a ‘good’ drawing every day. I just said I would do a drawing every day. In the morning when I checked my ‘likes’ I was shocked at how well liked it was and two people even said it was their favorite. 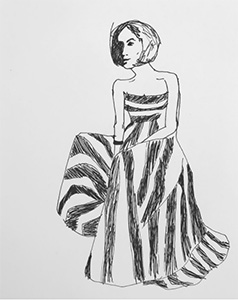 the favorite of many, just not me

Whaaat? Didn’t these people have eyes? Didn’t they see how bad it was? Or maybe, just maybe, it wasn’t up to me to decide.

My job was just to draw every day and leave it at that.

It turns out Andy Warhol was right when he said:

“Don’t think about making art, just get it done. Let everyone else decide if it’s good or bad, whether they love it or hate it. While they are deciding, make even more art.”

I started drawing with pencil but found I obsessed over every line – often erasing and re-drawing over and over again. It was taking the fun out of it. I was crippling myself in my quest for perfection. So I switched to ink. Ink was completely liberating. I found myself confidently drawing with a ‘don’t look back’ attitude.

Removing the option to rectify ‘mistakes’ gave me freedom to make mistakes and find a way to make them work.

I learned to rely more on what I saw and the quality of my drawings improved.

Not being able to erase gave me freedom

After many, many line drawings I got bored. I got bored of the way they looked, the lack of color and of the experience. I felt like I’d hit a plateau. If you’re like me, you don’t like that feeling.

This pushed me to try a new medium: watercolor.

I used my inexperience with watercolor to give myself permission to make mistakes. I didn’t expect a lot from myself and found freedom once again.

Until recently, two days in a row was the best I had done at meeting a daily goal. I decided to fix that. I set a goal to do something for 30 days in a row and it took me many attempts to actually make the full 30 days. Thrice I failed at day 28. But after each failure I just started again at day one. At last I succeeded at meeting the 30 day goal, which led to 90 days, which led to 180 days. Because I had built this in myself I knew I could do a full 365 days in a row. And I didn’t miss a single day.

The first three months or so were the hardest. I often forgot to do the drawing until I was lying in bed, ready to sleep. I cursed myself for making this commitment. I complained, I half-assed some drawings. And every now and then I did something I was really, really proud of .

Soon daily drawing became of part of me and instead of suffering over it, I just did it. I drew while riding in a car. I drew on a boat. I left parties to draw. I drew on a beach while kids had a water fight next to me. I drew in poorly lit rooms whilst late night conversations happened on the sidelines. I drew when exhausted and got out of bed to draw.

I learned to be persistent simply by being persistent.

I started this project simply to get better at drawing and I did improve. What I didn’t anticipate was that I got to know myself better.

I learned what I liked to draw (people; interior vignettes) and what I didn’t (hands; still life with wine and a spiral-sliced ham).

I learned what I do when I get bored.

I learned more of my weaknesses and strengths.

I learned that I can keep a promise to myself, even when it’s difficult.

I learned to let go of expectations and what happens when I do (good stuff).

I learned to find my own approval.

I learned how to make mistakes and fail and to keep going.

What do you want to have more of in your life? What can you do, starting tomorrow, or even today, to move in that direction?

My suggestions for you:

a) Pick a skill you want to develop and then pick an activity you are confident you can do every day to get you there. Keep it simple, be specific and know how you will measure that you’ve done it.

b) Find someone to be accountable to. Send an email or text to a friend letting them know you’ve done the thing you said you’d do.

d) when you miss a day or fail at it, keep going.

To see more drawings please check out my Instagram profile.