TOKYO — The bride wore a birthday cake of a dress, with a scalloped-edge bodice and a large hoop skirt. A veil sprouted from her black bob. Moments before the wedding began, she stood quietly on a staircase, waiting to descend to the ceremony.

This was no conventional wedding to join two people in matrimony. Instead, a group of nearly 30 friends gathered in a banquet room in one of Tokyo’s most fashionable districts last year to witness Sanae Hanaoka, 31, as she performed a public declaration of her love — for her single self.

“I wanted to figure out how to live on my own,” Ms. Hanaoka told the group, standing alone on a stage as she thanked them for attending her solo wedding. “I want to rely on my own strength.”

Not so long ago, Japanese women who remained unmarried after the age of 25 were referred to as “Christmas cake,” a slur comparing them to old holiday pastries that cannot be sold after Dec. 25.

Today, such outright insults have faded as a growing number of Japanese women are postponing or forgoing marriage, rejecting the traditional path that leads to what many now regard as a life of domestic drudgery.

The percentage of women who work in Japan is higher than ever, yet cultural norms have not caught up: Japanese wives and mothers are still typically expected to bear the brunt of the housework, child care and help for their aging relatives, a factor that stymies many of their careers.

Fed up with the double standard, Japanese women are increasingly opting out of marriage altogether, focusing on their work and newfound freedoms, but also alarming politicians preoccupied with trying to reverse Japan’s declining population.

As recently as the mid-1990s, only one in 20 women in Japan had never been married by the time they turned 50, according to government census figures. But by 2015, the most recent year for which statistics are available, that had changed drastically, with one in seven women remaining unmarried by that age.

And for women ages 35 to 39, the percentage was even higher: Nearly a quarter had never been married, compared with only about 10 percent two decades earlier.

The change is so striking that a growing number of businesses now cater to singles, and to single women in particular. There are single karaoke salons featuring women-only zones, restaurants designed for solo diners, and apartment complexes that target women looking to buy or rent homes on their own. Travel companies book tours for single women, and photo studios offer sessions in which women can don wedding dresses and pose for solo bridal portraits.

“I thought, ‘If I get married, I will just have to do more housework,’” said Kayoko Masuda, 49, a single cartoonist who stopped by to croon in private at a One Kara solo karaoke salon in Tokyo. A separate section is cordoned off for women, behind sliding doors marked “Ladies Only.”

“I loved my job, and I wanted to be free to do it,” Ms. Masuda said of her unmarried status.

Last year, the number of couples getting married hit the lowest level since the end of World War II, according to government estimates. It was the sixth straight year of decline in the nation’s marriage rate, which is falling at a much faster clip than the drop in Japan’s population over all.

Not surprisingly, the number of births in Japan — a country where few people have children out of wedlock — is also tumbling. Last year, the number of babies born in the country fell to the lowest level since at least 1899, when record-keeping began.

Local governments, eager to encourage marriage and raise fertility, have started campaigns to bring couples together. “We are working on fostering a mind for marriage,” reads an ad for matchmaking tours and seminars for singles sponsored by the Tokyo Metropolitan Government.

But for more and more Japanese women — who have traditionally been circumscribed by their relationships with men, children and other family members — singlehood represents a form of liberation.

“When they marry, they have to give up so many things,” said Mari Miura, a professor of political science at Sophia University in Tokyo, “so many freedoms and so much independence.”

The shift is tied to the changing Japanese work force. Close to 70 percent of women ages 15 to 64 now have jobs — a record. But their careers are often held back by a relentless tide of domestic burdens, like filling out the meticulous daily logs required by their children’s day-care centers, preparing the intricate meals often expected of Japanese women, supervising and signing off on homework from school and afterschool tutoring sessions, or hanging rounds of laundry — because few households have electric dryers. 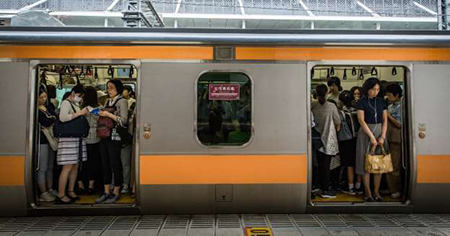 While some men say they want to pitch in more and the government has urged businesses to reform the crushing work culture, employees are still expected to devote most of their waking hours to the company, making it difficult for many husbands to participate much on the home front.

“It’s so obvious for a lot of women who have jobs that it’s very difficult to find a man who is available to be a caretaker in the family,” said Kumiko Nemoto, a professor of sociology at Kyoto University of Foreign Studies.

Japan’s consumption-oriented culture also means that single women with careers and money have a wide range of activities and emotional outlets that their mothers or grandmothers did not, Ms. Nemoto added. And, notably, Japanese women no longer need husbands to ensure their economic security.

“One reason to get married for a woman is to have a stable financial life,” said Miki Matsui, 49, a director at a Tokyo publishing house. “I don’t have any worries about being alone with myself or any financial worries. So I did not have to chase myself into a corner and choose marriage for financial reasons.”

For some single women, their married friends with children serve as cautionary tales.

Shigeko Shirota, 48, who works as an administrator at a preschool and lives in a condominium she bought herself, says many of her married friends stay home with their children and get little help from their husbands.

“It’s not fair for women to have to be stuck in their homes as housewives,” Ms. Shirota said. “They are happy as long as they are with their kids, but some of them just describe their husbands as a big baby. They don’t really like having to take care of their husbands.”

Singlehood has freed Ms. Shirota to travel extensively and pursue her hobbies. She has enrolled in jewelry-making classes and is an avid Irish dancer. Last summer she competed as a dancer in Ireland and then took her mother on a trip to China. A couple of years ago, she went on a luxury cruise on the Queen Elizabeth line and booked a stateroom for herself.

“We don’t have to rely on men anymore,” Ms. Shirota said.

On a recent evening, she joined five other women at an Irish dancing lesson in a studio tucked on an upper floor of a department store in a Tokyo suburb. As the group practiced jigs and reels, Ms. Shirota glided across the wood floor with piston-sharp kicks and precise steps.

After class, the women ordered tea and sandwiches at a restaurant a few floors down. Ms. Shirota pulled out her phone to show pictures of her summer trip to Ireland. One classmate, a married mother of three teenagers, reminisced about a family trip there years earlier, lamenting how she had not returned because of the prohibitive cost of airline tickets for a family of five.

Some men are reacting to Japan’s economic realities by shying away from marriage as well. Ever since Japan’s speculative stock and property bubble burst in the early 1990s, wages have flatlined. The long-held social compact between employers and workers — in which few people were ever laid off and employees were guaranteed lifelong employment — has diminished. About one-fifth of men are now consigned to irregular contract jobs that offer little stability or potential for advancement.

With the social expectation that men should be the primary breadwinners, many men worry they will struggle to support a household financially. Just over a third of men ages 35 to 39 have never been married, up from less than a quarter 20 years ago.

“Nowadays, men’s wages are not growing, so they don’t make enough to support their own families,” said Kazuhisa Arakawa, a senior director at a marketing firm who wrote “Super-Solo Society” and “The Rise of the Solo Economy.”

Mr. Arakawa, who came of age in the late-bubble years and is single himself, says that many of his male peers view marriage as an encumbrance.

Of course, matters of the heart do not strictly conform to economic conditions. Remaining single is often less of a deliberate stance than a reflection that the urgency to get married has diminished in today’s society, experts say.

“The data suggests very few women look at the lay of the land and say ‘I’m not going to marry,’” said James Raymo, a professor of sociology at the University of Wisconsin-Madison who has written extensively about marriage in Japan. Rather, he said, they “postpone and postpone and wait for the right circumstances, and then those circumstances never quite align and they drift into lifelong singlehood.”

Kaori Shibuya, 42, had a long-term relationship in her 20s that didn’t work out, and then met a marriage prospect through a matchmaker in her 30s. But there was no chemistry. She has dated occasionally since then.

“I don’t think I have chosen a path,” she said. “But I have had all these chances along the way.”

Ms. Shibuya, who lives with her widowed mother, said some women choose marriage because they feel vulnerable on their own. But she started her own business two years ago — a cafe — and is confident she can support herself.

As a child, Ms. Shibuya said, her parents’ relationship looked idyllic. “But now as an adult, I look back and realize maybe she had to bear many burdens,” she said. “In the older generations, husbands were the bosses of the family and the wives were obedient and in a weaker position.”

Women who are not interested in having children often see little point in marriage. Though single motherhood is on the rise in Japan, it is largely due to divorce rather than women choosing to have children on their own.

“It’s not too much of an exaggeration to say that people in Japan get married because they want to have kids,” said Mary C. Brinton, a professor of sociology at Harvard University who focuses on contemporary Japan. “If you’re not going to have kids, there are fewer reasons to get married in Japan.”

Being single comes with trade-offs, too. Ms. Hanaoka, the woman who held a solo wedding last year, shares a ramshackle house on the outskirts of Tokyo with two roommates. When loneliness creeps in, she pulls up the video of her ceremony to remind her of the people who support and love her.

Ms. Hanaoka also recalls that, when she was growing up, her mother often seemed unhappy. Then, after college, she taught kindergarten, giving her a firsthand look at how many mothers seemed to be “trying too hard to take care of their own children, but not taking care of themselves.”

“If I become a mother,” Ms. Hanaoka said, “I am afraid that I will be expected to act in the mother role that is demanded by Japanese society, rather than being myself.”

She has dated on and off, lives frugally and, relishing her freedom, took a trip to Mexico last fall.

“I would rather do what I want to do right now,” she said.